Mark has a custom cherry squirrel rifle that we built for him in .36 caliber.  He sent us these pictures of some of the squirrels that he took with his gun.  He said "I got 10 squirrels and all were head shots except one.  She moved."  And as you can see in the picture he […]

Our friend Woody bags a big buck with his Yorktown Rifle. Woody hunts on the ground with a flintlock and no bait.

Recreating the American frontier of the 18th century and that in Germany with a gun from one of the best gunshops that I know and I´m really proud of it! Best wishes from Germany Monty 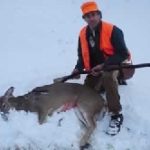 Here s the first deer I bagged with the .54 cal. Yorktown that I built from a Cabin Creek kit. I m a dairy farmer and have to go stalking as they re bedded down usually by the time I get out. I kind of pulled a "Hawkeye" on this one. I saw where they […]