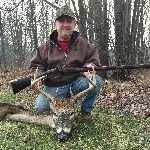 A huge congratulations to John Bernot on his success in the field this year. He bought one of our .45 caliber ladies rifle kits, assembled it himself, and took it out hunting this year. While hunting on December 26, 2014 he shot a beautiful buck. Then only a couple weeks later, on January 16, 2015 […] 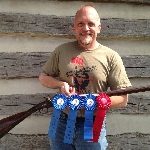 Congratulations to Bill for his 3 first place ribbons and 1 second place ribbon on his rifle he entered at the 2014 Dixons Gunmakers Fair. Bill took our Arms Making Workshop in May, and focused on his stock architecture and stock finishing while he was here. 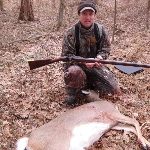 Chris has one of our Yorktown rifles, and has had very good luck with it in the field. Chris sent this photo and said… Brad, Your 54 York rifle never misses(95/FF,.018 pillow ticking patch), 5 years straight one shot one kill.  Thanks for a shooter.  Chris. 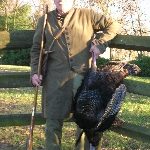 Congratulations to Spark on his turkey kill this year with his custom built “Wetzel” rifle that we built him.  Spark Said, “On the 19th I harvested a gobbler.  It weighed 17 1/2 lbs.  It had a 10 1/4 inch beared and 1 inch spurs.  One shot at 60 yards. The rifle is handling great.”

Congratulations to Spark for his deer kill on the opening day of Pennsylvania Rifle season with his .52 caliber "Wetzel" rifle that we just recently finished for him.   He was using a .507 round ball with 75 grains of 3F powder.  It was a One Shot Kill and Spark says "The Wetzel Legend Lives […] 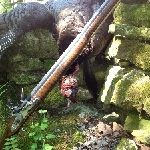 Hello Brad "I would like to send a personal and positive "Testimonial" on my straight rifled .54/28 gauge Virginia gun kit you supplied! As you can see this winters work was put to use today! I worked up a few loads that I felt good about. This was 65 grains of 2F 1 3/8 oz […]

We would like to congratulate Jeff for his great success at The Gunmakers Fair at Dixons this year. Jeff was a student in our Arms Making Workshop in May. After the workshop Jeff built this Beautiful Rupp rifle, entered it in the competition at Dixons and won Five first place ribbons for his efforts. CONGRATULATIONS […] 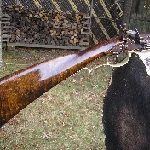 Lenny was one of our students this past year for our Arms Making Workshop here at Cabin Creek.  Lenny chose to build a Pa. Mnt. Rifle kit.  He accomplished most of the gun while he was here at the class but he had a few things to finish once he got home.  Once he finished […] 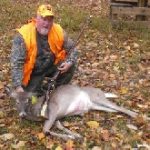 Mike was proud to send us these photos of his Doe kill in the early 2011 Flintlock season here in PA.  This is the first deer that Mike has ever taken with a flintlock rifle and it just so happened to be with his .54 caliber Virginia Rifle that we just completed for him.  The […] 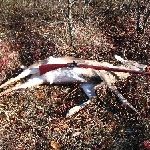 David Woolsey has one of our Pa Mountain Rifle Kits.  He sent us these pictures and I asked him if he had a story to go along with them.  This was his Reply… Well….  I looked for a simple well made rifle in .50 or .54 and the Cabin Creek PA Mountain Rifle fit the […]