This is an example of a fighting knife that was made here in the shop.  The 10″ blade is hand forged from original un-worked Wrought Iron from the 18th Century.  It was then heat treated using all 18th Century methods to ensure the blade held a good edge.  The S-guard and pommel were also both […] 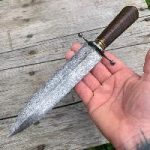 This is an example of a custom made dagger by Shane.  The customer had an idea of what he wanted, which included a diamond shaped handle with a diamond shape inlay in the pommel.  The blade is hand forged from 1095 spring steel and is a double edge dagger.  It features a through tang that […] 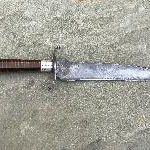 This large fighting knife by Shane was hand forged from 1095 spring steel, featuring a 10″ blade with an overall length of 15″. The thickness of the spine at the bolster is almost 1/4″ and the height of the blade is 1 5/8″. Construction of the knife consists of a full through tang that is […] 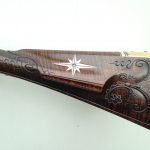 Many surviving "Early Virginia" rifles exhibit a very pleasing blend of both German and British traits and characteristics.  This cultural amalgamation results from German trained Gunsmiths mostly out of Eastern Pennsylvania migrating into the Shenandoah Valley of Virginia to service the needs of the English residents on the Virginia frontier.  The rifle shown here is […] 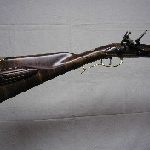 This rifle is based off the Johanes Faber rifle. This rifle features a 44" Colerain barrel rifled in 50 cal and has a Chambers Virginia Lock.  With the exception of those two pieces the rest of the rifle will have all handmade mounts and hardware and will be stocked from a blank of Curly Maple.  […] 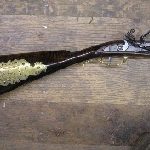 This rifle is built in the style of J.P. Beck.  The stock is a piece of rock hard curly maple that was hand sculpted and shaped after the barrel was inlet.  It features a 38" Colerain barrel in .54 caliber.  The lock is a Chambers Golden Age lock that we re-worked.  This rifle has a […]

This rifle is an Early York style rifle with one of our custom Wrought Iron barrels.  This rifle features a custom lock which we made using castings and re-filing and re-fitting them.  The rifle also features a hand forged barrel tang and a side plate which was hand made using cast sheet brass.  The trigger for the rifle is […] 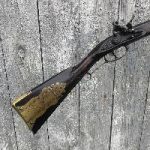 Our Boys and Ladies Rifle is designed in the style that was being made in Lancaster Co., Pa, in the 1770’s by the celebrated gunsmith Jacob Dickert. Dickert’s rifles were widely known for their quality and beauty, as well as their comfortable handling. This rifle has been scaled down to achieve the proper balance and […] 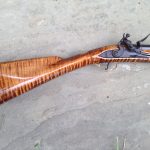 Our Colonial American Fowler is a Lancaster county Pennsylvania Style fowling piece from the 1760-1780 period. It is based largely on a surviving example believed to have been made by John Newcomer in, Hempfield Twp, Lancaster County. One of the most unique and pleasing features of the American Fowler is the resulting overall architecture that […] 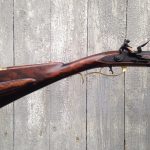 Rifles made in the 18th Century in the Southern Colonies as a whole, display traits and characteristics that vary widely. The evolution of the southern longrifle in Colonial American was much more erratic than that of it’s Pennsylvania counterpart. Many of these southern rifles also exhibit the efforts of a gunsmith trying to blend the […]